Football in its purest state

Football is a sport that’s accessible to all. The recreation club Clube Recreativo da Praia da Leirosa aims to train young athletes and give them the means to keep growing their love of playing football.

Last September’s grand opening of the synthetic grass pitch at the Clube Recreativo da Praia da Leirosa (CRPL) marks a change in the landscape of this club that goes back almost 40 years. The CRPL currently has around 110 athletes who play associated and non-associated football in different age categories: Minis (Over 4s), Petizes (Under 7s), Traquinas (Under 9s), Benjamins (Under 11s), Infantis (Under 13s), Iniciados (Under 15s) and Juvenis (Under 17s). The club has focused its work exclusively on training youngsters. It’s football in its purest state. The young athletes learn the rules and concept of the game. They all want to grow and improve, and this is what heightens their dexterity and commitment. It’s healthy competition, instilling values, so that they can be better athletes without ever letting go of their love of the game.

In order to retain this enjoyment of playing football, sports facilities need to be improved. It’s a way of preserving and defending football’s charm. It’s no wonder that the CRPL, “had for a long time wanted a synthetic grass pitch at Praia da Leirosa”, according to club chairperson, Paula Vicente. Even though they knew it wouldn’t be easy, they worked day after day, year after year, in an effort to make it happen, always in the knowledge that for a body such as the CRPL it would be impossible to acquire such a valuable infrastructure unless they had help from partners. This desire had already come from the former chair, Paula Ramos, and the current chair kept it going until it eventually came to fruition.

According to Paula Vicente, “We always believed that one day someone would see the value of our work and would join us to make this dream a reality”. She adds that this dream was not just hers but everybody’s, particularly all the youngsters who for years played on Praia da Leirosa’s earthen pitch.

In 2015 the club was invited to submit an application within the remit of Figueira da Foz City Council’s Participatory Budget. Knowing before they even started that the amount requested would not be sufficient to fulfil their dream of pitch made of synthetic grass, they nevertheless submitted their application. The aim was to show that there was a strong desire to achieve this goal and to prove that they would not give up. One year later, the day came when they felt that their dream could start to become a reality. “We were informed that Figueira da Foz County Council was going to include the project in its overall selections and that Celbi would be our partner.”

Paula Vicente says that when they heard that Celbi would be partnering with them on this project, all their worries disappeared. “We are fully aware that Celbi’s support on this project was crucial to its completion.”

The switch from an earthen pitch to one covered in synthetic grass is significant. The synthetic surface enables much faster playing and training. Execution is much quicker, the young athletes’ technical and physical skills are improved and they are forced to think more quickly, and the tactical aspect of their game is enhanced.

The Figueira da Foz council acts as a facilitator, ensuring the necessary logistical, material and  financial help whenever it recognises that a process falls within the framework of the guidelines on practising physical activity. The mayor, João Ataíde, emphasizes that “stimulating participation in sports must be coordinated with the educational system and the council’s sports movement, in which youngsters are naturally incorporated”. In order to improve this process, work must be done on some of the municipal sports facilities with a view to improving conditions, namely “the construction of new facilities and support structures for outdoor sports”.

João Ataíde explains that the council’s plan of action is managed on the basis of priorities, which are implemented in accordance with budget availability, together with the possibility of, whenever possible, applying for community funds. The updating of the sports ground in Praia da Leirosa is one such case. The space was enhanced by installing artificial lighting and a new synthetic grass pitch whose final cost was approximately 500 thousand Euros. Of this amount, 345 thousand Euros came from the Figueira da Foz Council, using community funds, whilst Celbi paid the remaining 155 thousand Euros to allow the job to be completed.

The council leader highlights that these improvements are a reflection of the measures adopted by the executive, to strengthen community ties with sport. According to João Ataíde, the support from private bodies in promoting and developing new and better sports infrastructures is vital, “insofar as the monies collected by the various different bodies are insufficient to pay the associated costs”.

The support provided by private bodies was therefore a significant contribution towards improving sports training conditions and is also a decisive factor in reducing the costs of organising events which entail a considerable investment. 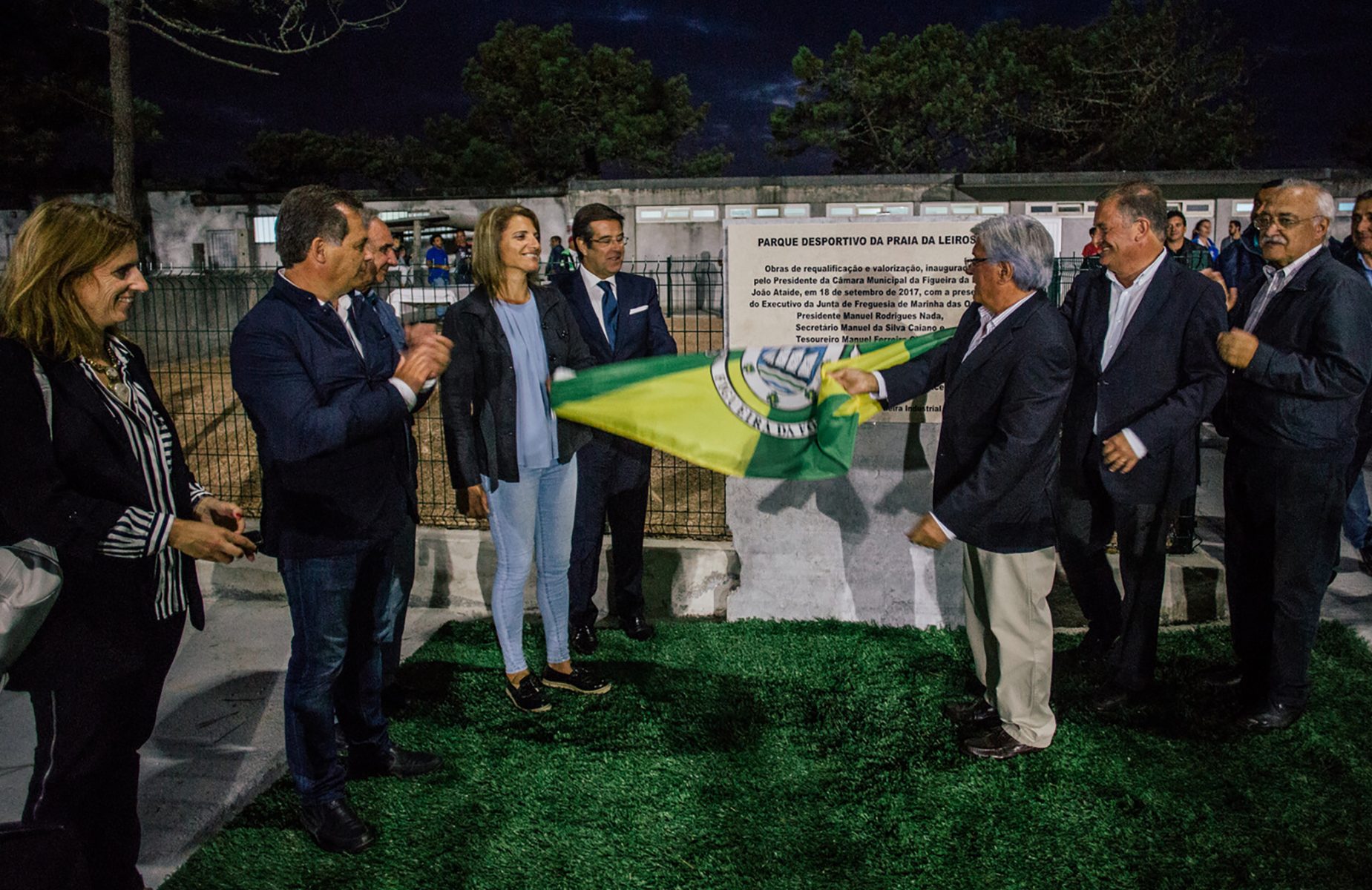 Inauguration of the sports complex of Praia da Leirosa 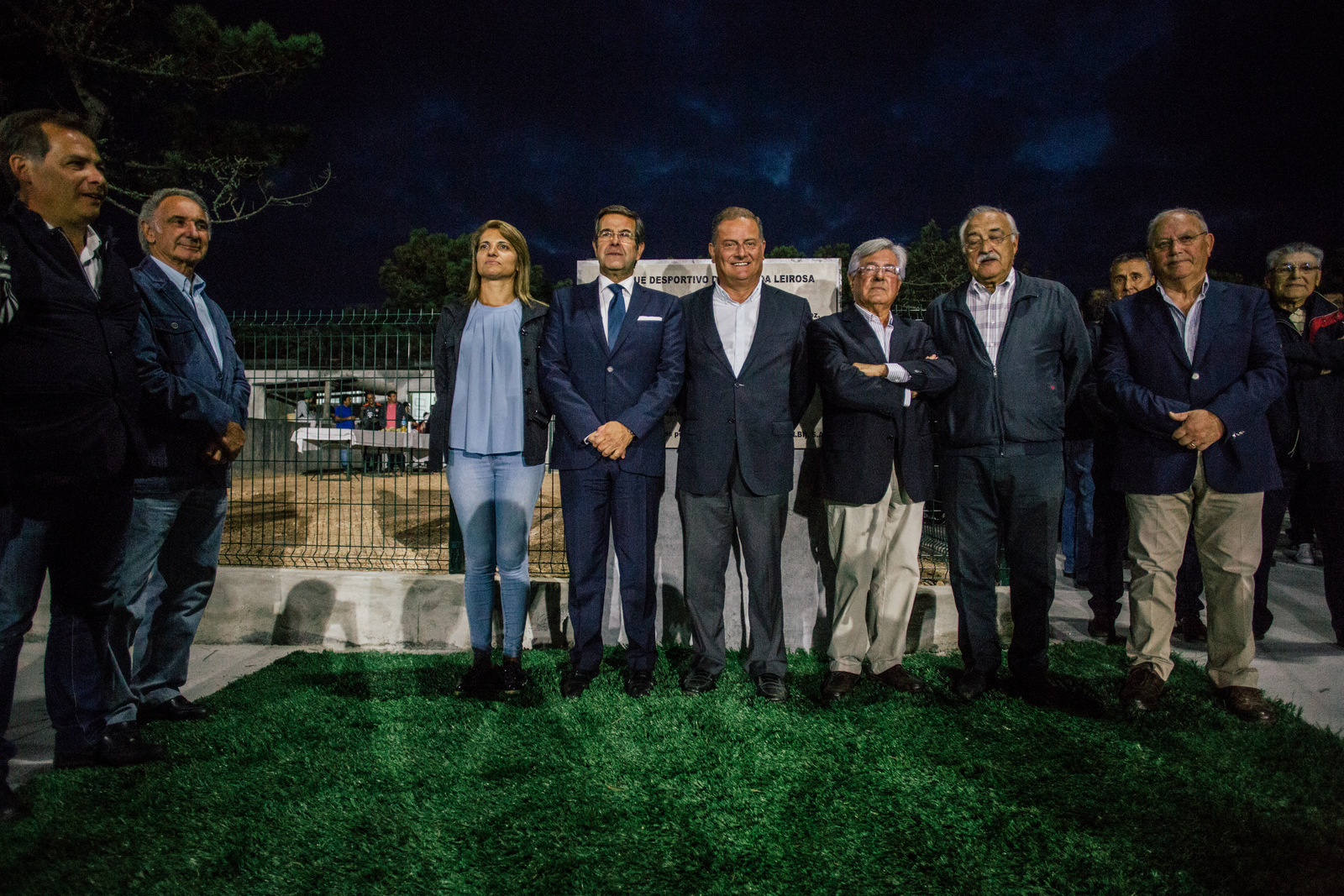 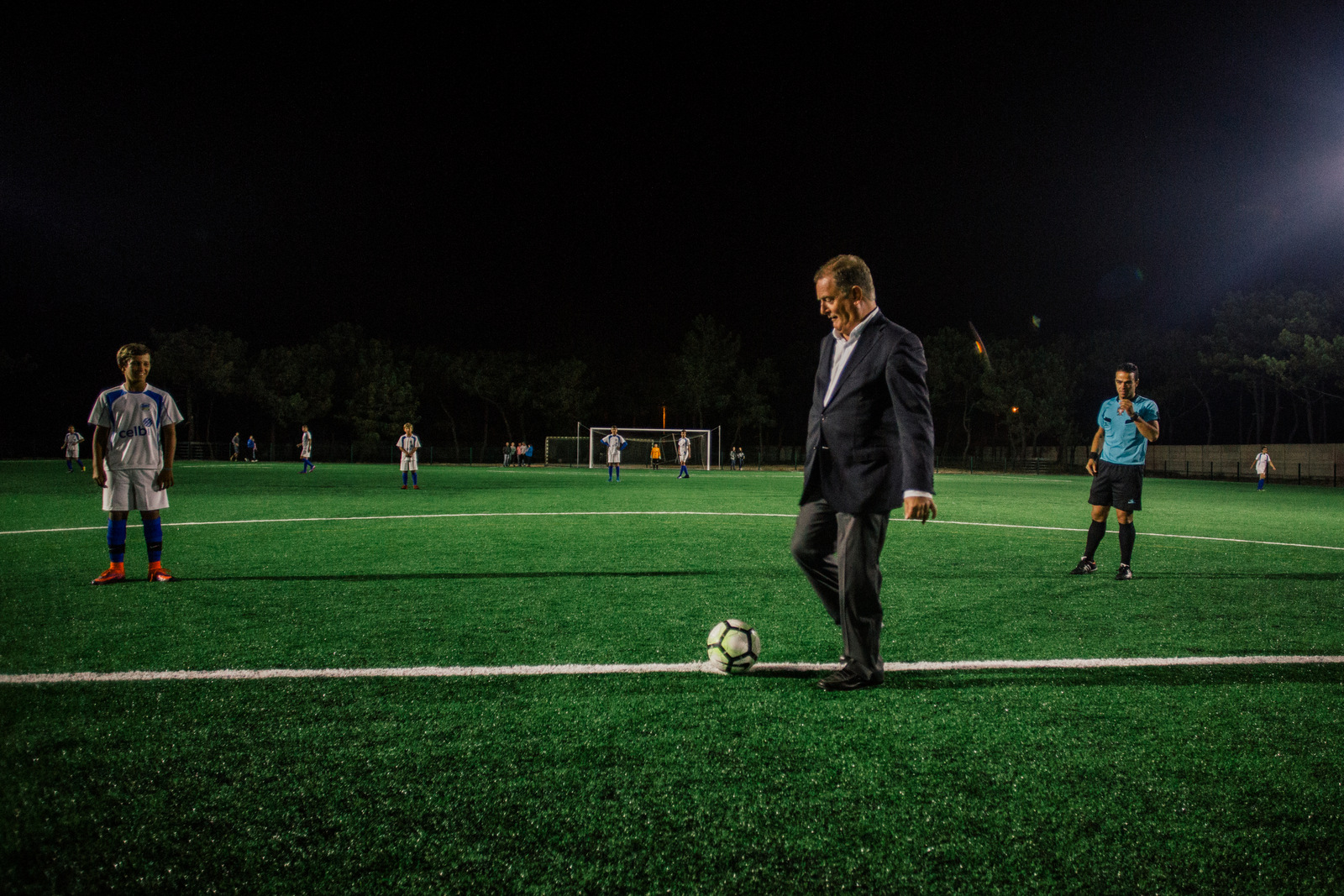 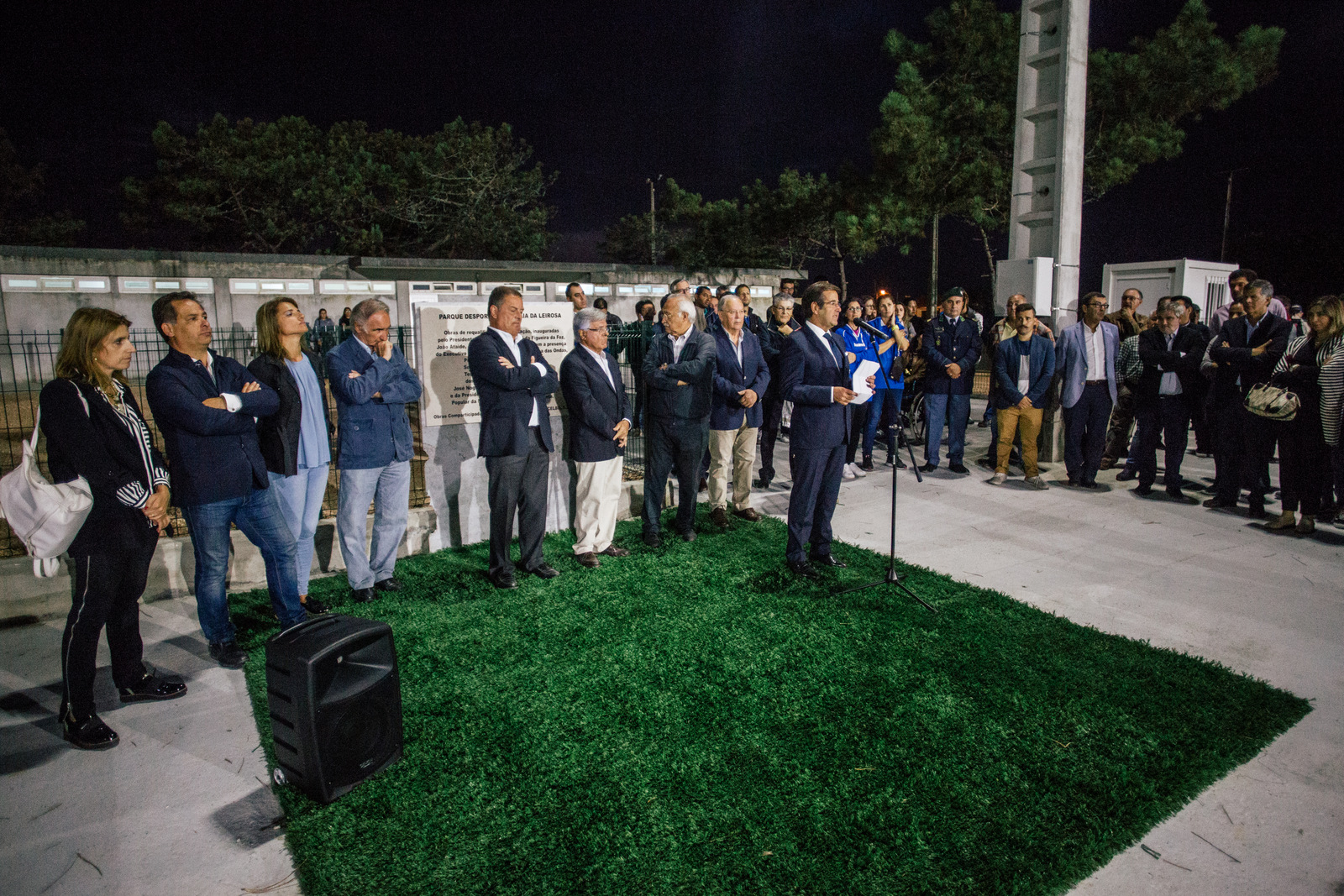 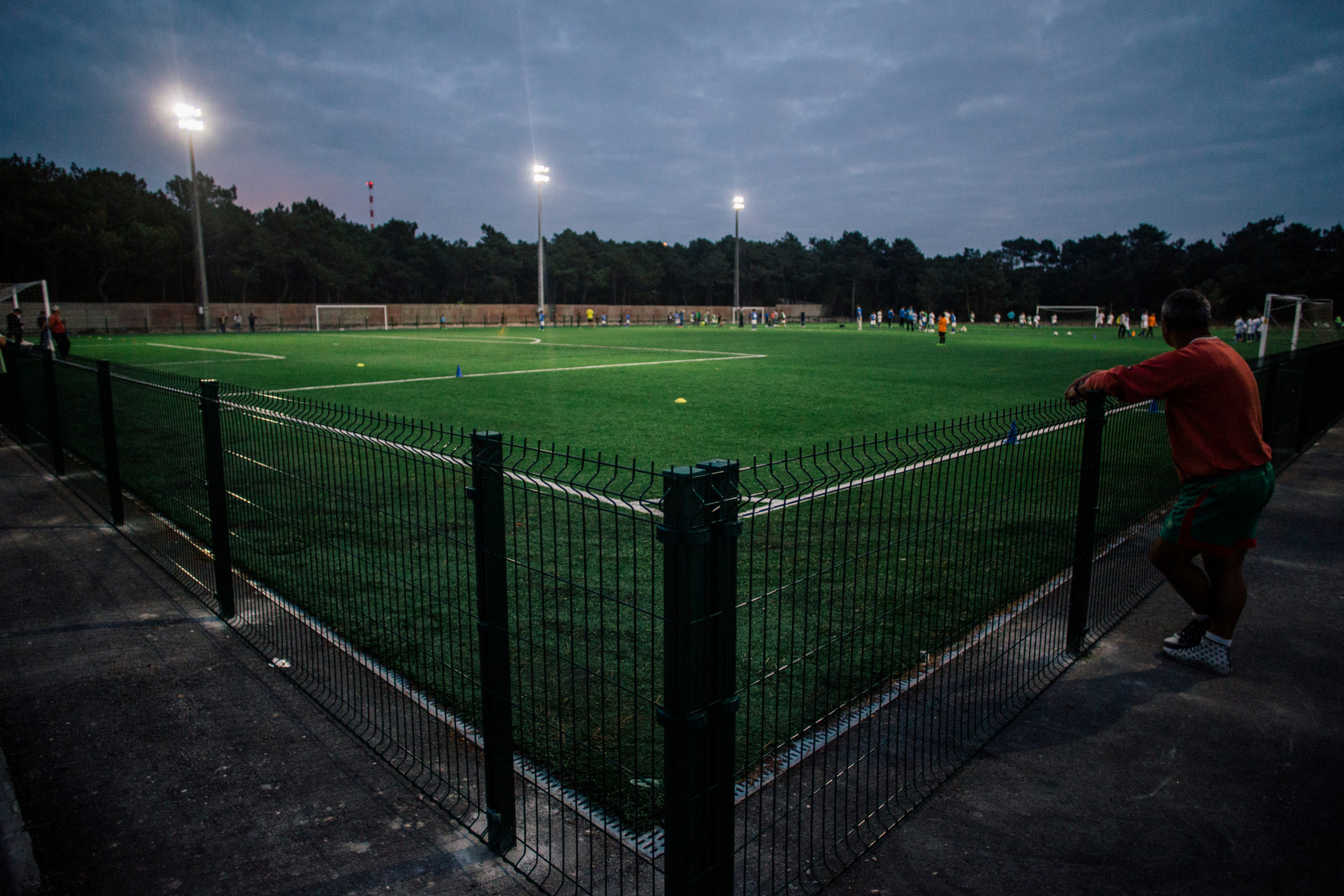 The council relies on Celbi

João Ataíde says “This initiative reveals the social responsibility which is important to Celbi, not only in terms of sport, but also in areas such as Education. The company’s commitment to the borough in which it is located is notable, and consists of support such as this, which made it possible to undertake a project which the Leirosa community had been yearning for for a long time”.

Nogueira dos Santos, the director of Celbi, spoke at the grand opening of the new sports ground and highlighted that “the company’s satisfaction and joy comes not only from the fact that we’ve seen the completion of a project to which we made a financial contribution, but also from our belief that the infrastructure which will be available to Leirosa will henceforth contribute decisively towards enhancing the quality of life of its population and will be one more attraction for visitors”.

Marinha das Ondas is the borough in the county of Figueira da Foz where the Clube Recreativo da Praia da Leirosa sports complex is located. Manuel da Conceição Rodrigues Nada, the chairman of the Parish Council in which the CRPL lies, states that the support they provided for sports is “just in logistical terms, via the authorities”, since budget restrictions “don’t leave much room to think about special budgets for sport or other activities, such as culture and others which we would very much like to establish in our borough”. The parish leader highlights that, with the help of the county council, they do promote some initiatives in Praia da Leirosa and at the Municipal Swimming Pool, and he does not hesitate to acknowledge that in order to implement these and other sports initiatives, the borough always has to rely on the support of local companies. Manuel da Conceição Rodrigues Nada discloses that “with the exception of Celbi, the borough’s businesses haven’t contributed at all to these initiatives”.

This initiative reveals the social responsibility which is important to Celbi, not only in terms of sport, but also in areas such as Education. The company’s commitment to the borough in which it is located is notable, and consists of support such as this, which made it possible to undertake a project which the Leirosa community had been yearning for for a long time 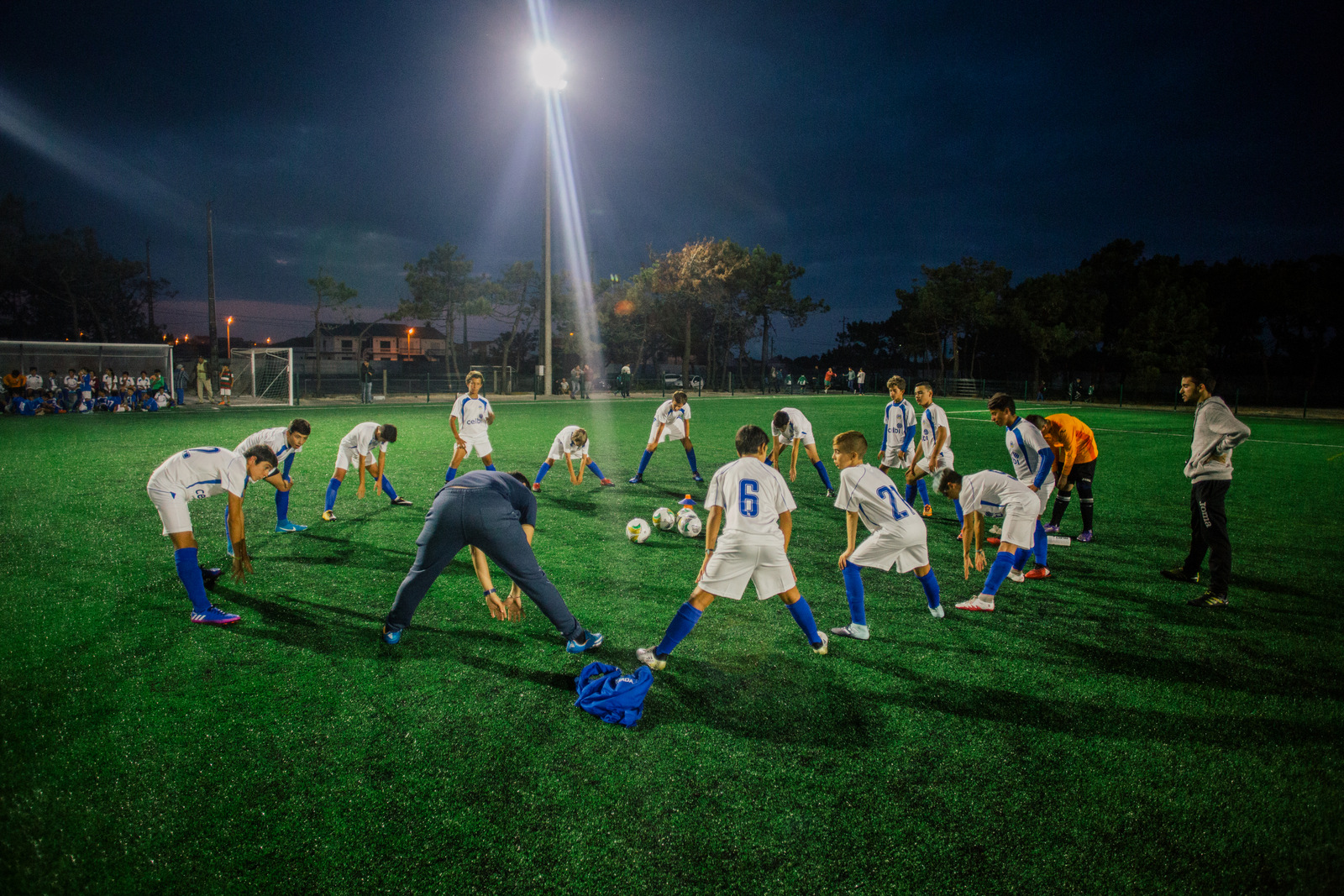 Celbi’s support to the CRPL does not end with its funds for the new synthetic grass pitch. It has been a long-time partner which Paula Vicente says has been very important to the development of the Praia da Leirosa Recreation Club. “It’s very satisfying for us this season to see our athletes dressed in our club’s and Celbi’s colours.”

Celbi gave equipment to the four different age categories and paid the entire water bill, covering both watering the pitch and supplying the showers. The savings made with these expenditures can be applied to improving things for the athletes. Vicente explains that it is currently compulsory for clubs to have accredited coaches.

“With Celbi taking on these expenses, we will have some wiggle room to save money to pay coaches.” Paula Vicente is thankful for Celbi’s support. Thanks to them, conditions are now in place so that “other athletes can seek out our facilities for playing football, and the proof of this is that already this season we have athletes from various different boroughs in the neighbouring county of Pombal”.

Advantages of the synthetic grass pitch

There are many differences between training on a synthetic pitch and an earthen one. The synthetic surface enables much faster playing and training. Execution is much quicker, the young athletes’ technical and physical skills are improved and they are forced to think more quickly, and the tactical aspect of their game is enhanced.

In terms of psychology, you just cannot compare the motivation to play on an earthen pitch and on a synthetic grass one. The same thing can be said of health and safety, in which respect an artificial surface has many advantages. On rainy days, it is extremely difficult to play or train on an earthen pitch. The ball comes to a standstill in puddles, making it impossible to pass, and this means that teams have to play the game with long passes, thus stifling improvement. A synthetic grass pitch allows for games with more individual quality, affording athletes the opportunity to shine and draw the spectators’ attention.

Synthetic grass requires greater physical effort from players. It makes for faster football, and demands fitter players. The chairperson of the CRPL; Paula Vicente concludes: “We are paying special attention to making sure our athletes warm up, to avoid muscle strains.”

The updating of the sports ground was the result of a protocol signed on 3rd October 2016, by the Figueira da Foz council, represented by mayor João Ataíde, by the Centro de Recreio Popular da Marinha das Ondas (CRPMO), represented by the chair of the board, Paula Ramos, and by Celulose Beira Industrial (Celbi), represented by its directors José António Nogueira dos Santos and Carlos Alberto Sousa Van Zeller e Silva.

The grand opening of the sports ground took place on 18th September 2017. The new complex has a competition–standard synthetic grass pitch for 11-a-side football, equipped with a full automatic irrigation network and an energy network which includes floodlights for official games.

The new pitch also has also been fitted with sports equipment such as goal nets and corner poles and flags, amongst other items. Improvements were also made to the 5-a-side football  pitch, which is now open to the public, enabling football and other sports to be played.

A lot of thought was put into the lighting, in terms of costs and the environment, which led us to opt for LED technology, allowing an average cost per hour figure of around 1.68 Euros, representing a saving of 2.7 times/hour when compared with the previous lighting. The LED solution installed will result in an annual reduction of 5 tonnes of CO2 from the Praia da Leirosa sports complex.