To improve energy and environmental efficiency, increase the production capacity at Celulose Beira Industrial SA (Celbi) and at the company Empresa de Celulose do Tejo SA (Celtejo), and to create skilled jobs. These are the main aims for the 125 million euro investment to which Altri has committed itself with the Portuguese government.

The agreement was sealed with an investment contract signed last January, in the presence of the Prime Minister, António Costa, and the Minis-ers for the Economy and Agriculture and Fo-rests, Manuel Caldeira Cabral and Luís Capoulas Santos respectively.

Of the 125 million euro total, 85 million are earmarked for making improvements at Celtejo, located in Vila Velha de Ródão, and the remaining 40 million will go to Celbi, in Figueira da Foz.

Celtejo increases capacity by over 49 thousand tonnes a year

The investment being made at Celtejo will allow for the introduction of innovative tissue pulp production processes, with a new approach which is more efficient and productive. A new recovery boiler, steam reduction equipment and a state-of-the-art industrial waste water treatment plant will enable the factory at Vila Velha de Ródão to increase its production capacity by 49 thousand tonnes a year. In 2020, the year after project completion, the total production capacity will rise to 267 thousand tonnes per year.

The investment amount for Celtejo is 85 million Euros. The result, in real terms, is an increase of 140 million Euros in the factory’s industrial activity and a total export value of 96 million Euros, around 70% of Celtejo’s total turnover. This is a major contribution towards increasing Altri’s exports, and gives impetus to the Portuguese economy.
The improvements to be made at the factory will help to create highly-skilled jobs as well as around 400 indirect jobs throughout the course of the project. Once completed in 2020, it will lead to the creation of 11 permanent highly-skilled jobs, and a total of 197 permanent positions will be maintained within the company.

Upon completion, Celtejo will join the world ranking of the top five facilities in terms of energy efficiency and the impact of pulp production on CO2, NOx and SO2 emissions. The factory’s efficiency also stems from a technology which optimises the use of raw material in the production of pulp for paper, by enabling eucalyptus stumps to be used rather than just the logs. It is the only factory to have this technology.

It is also expected that Celtejo’s increased production capacity with have a proportional knock–on effect on a whole range of Portuguese companies. Estimates point to 90 million Euros being spent by Celtejo on purchasing and sub-contracting services in the year following completion. This figure corresponds to 91% of the company’s total external services, supplies and purchases. 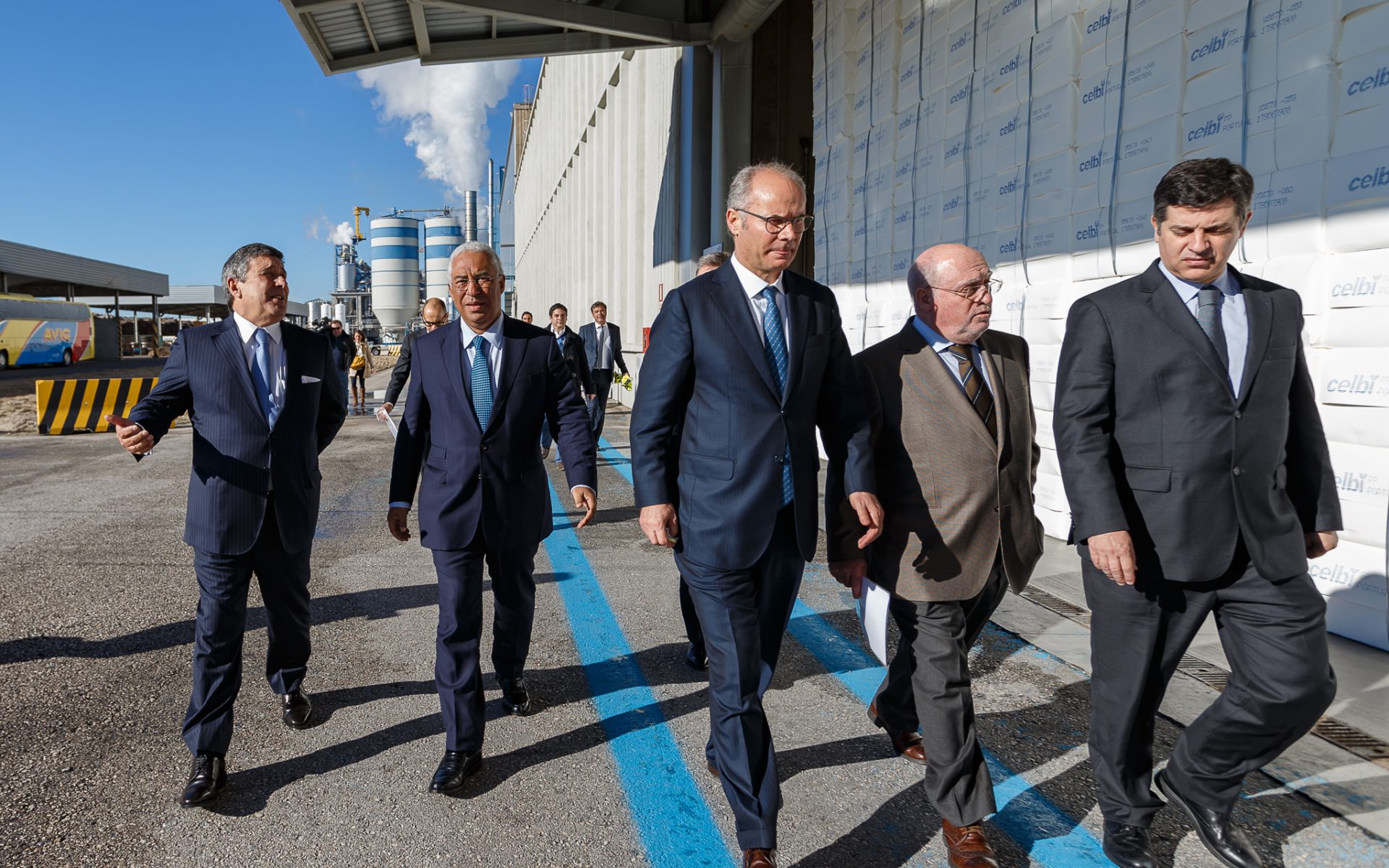 Paulo Fernandes and Borges de Oliveira, received the Prime Minister, António Costa, at the ceremony that sealed the investment agreement with the Portuguese state 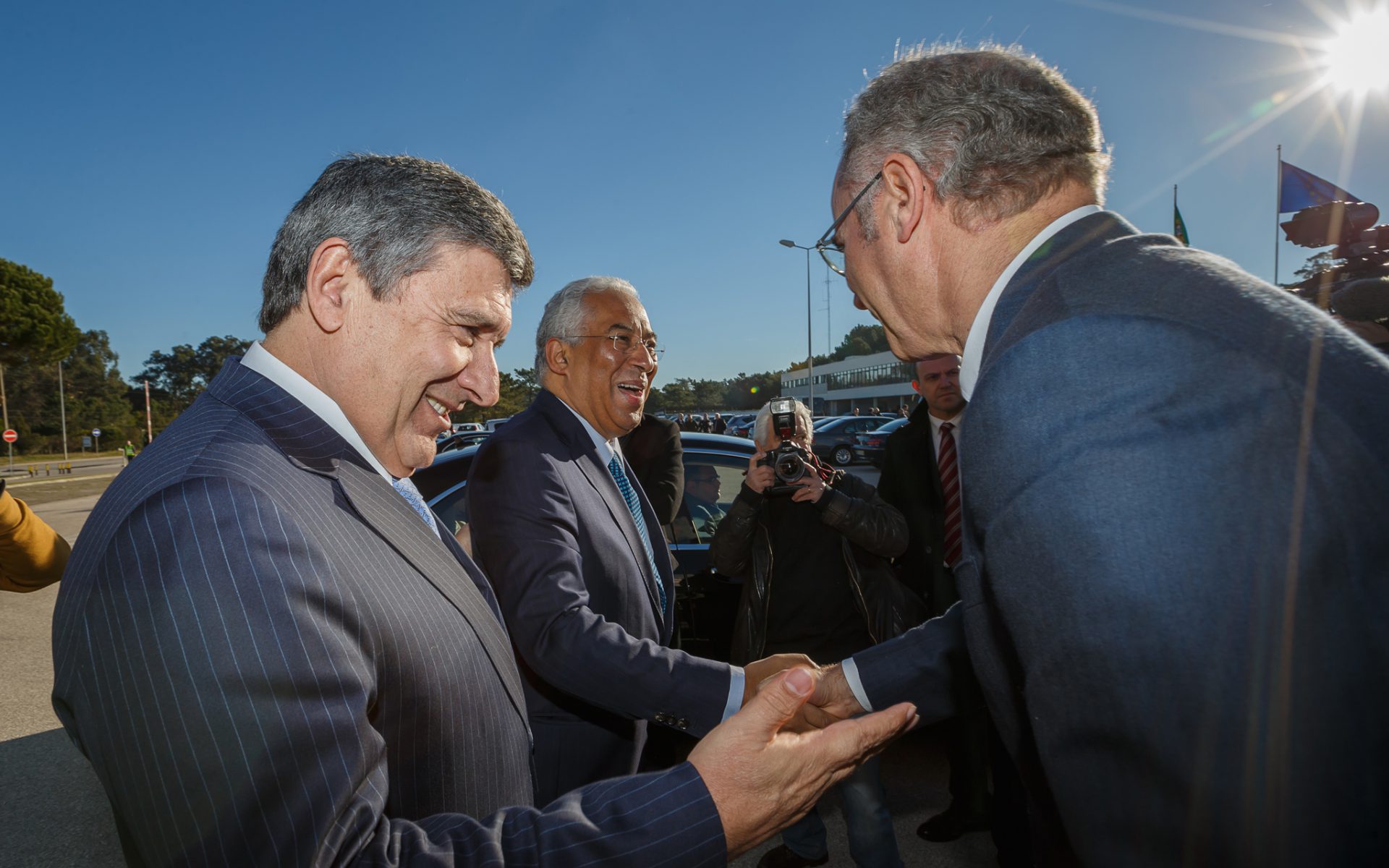 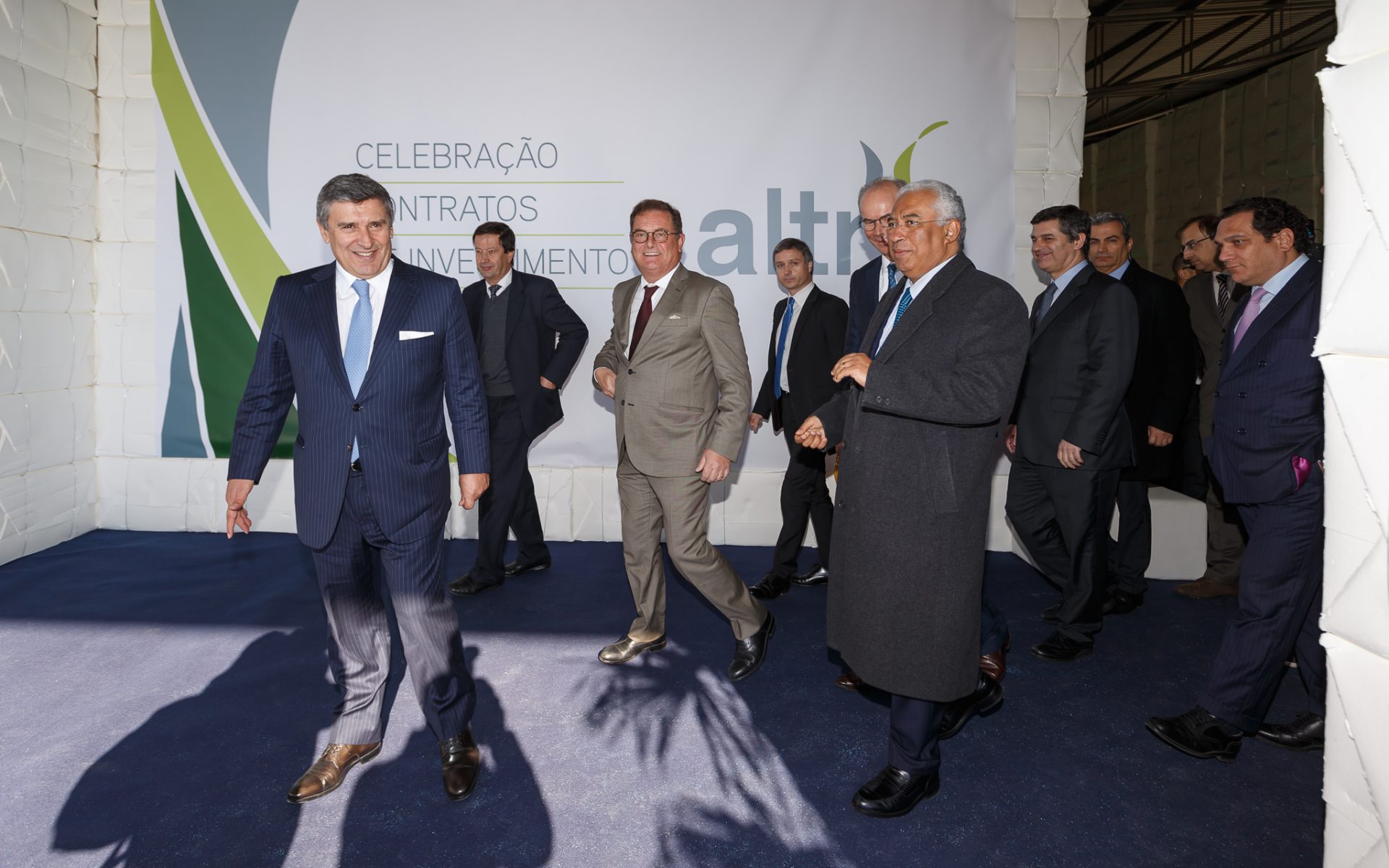 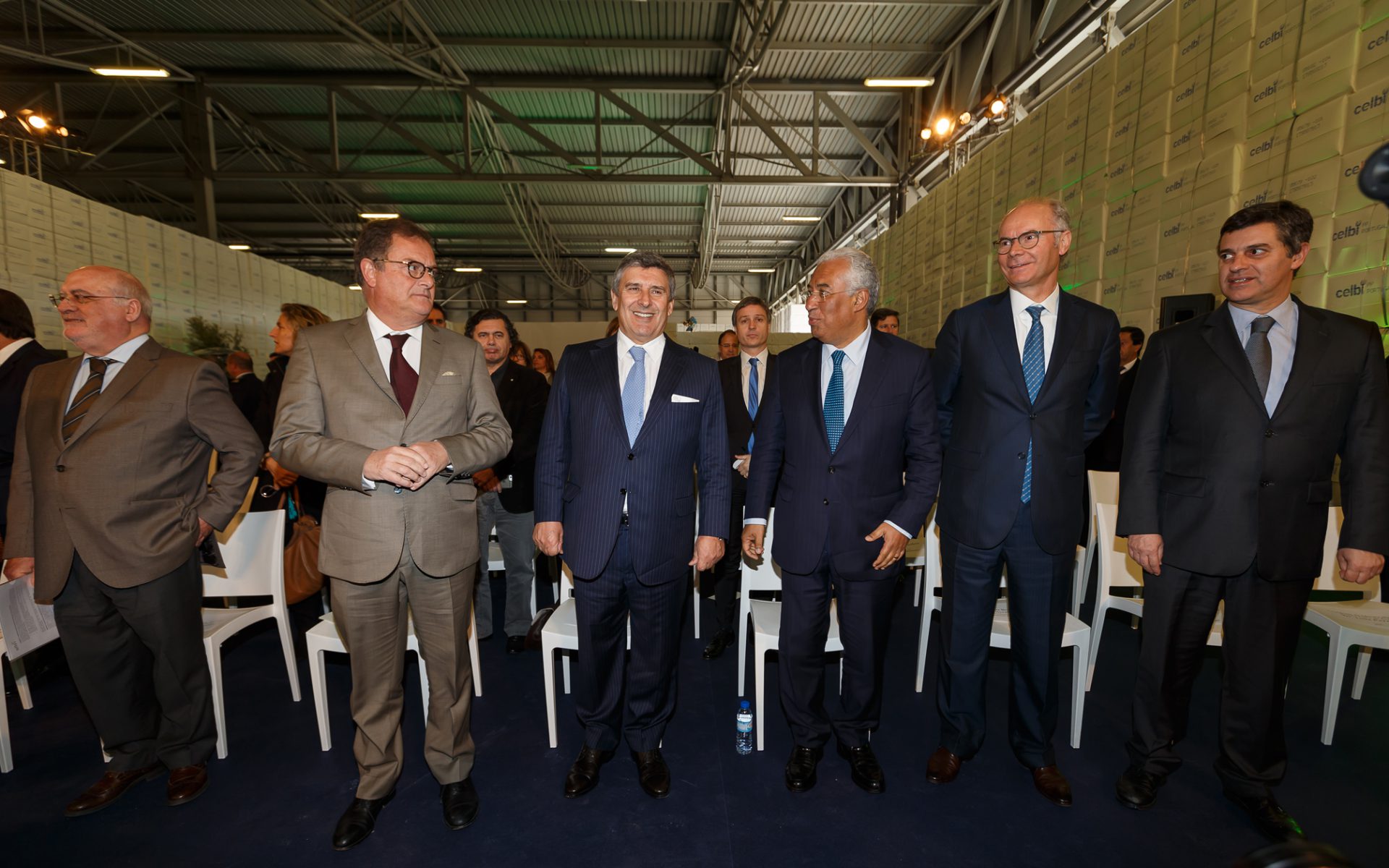 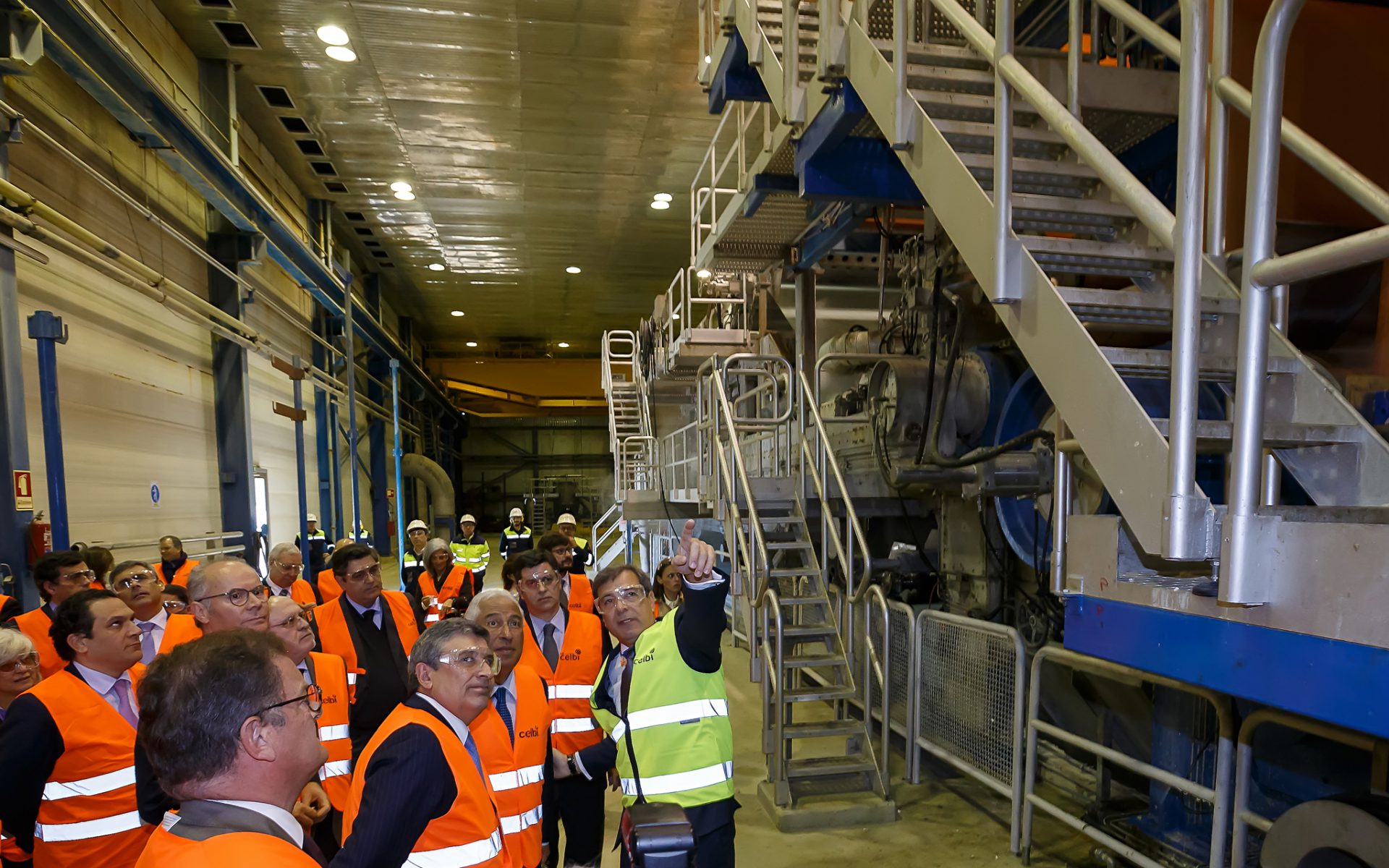 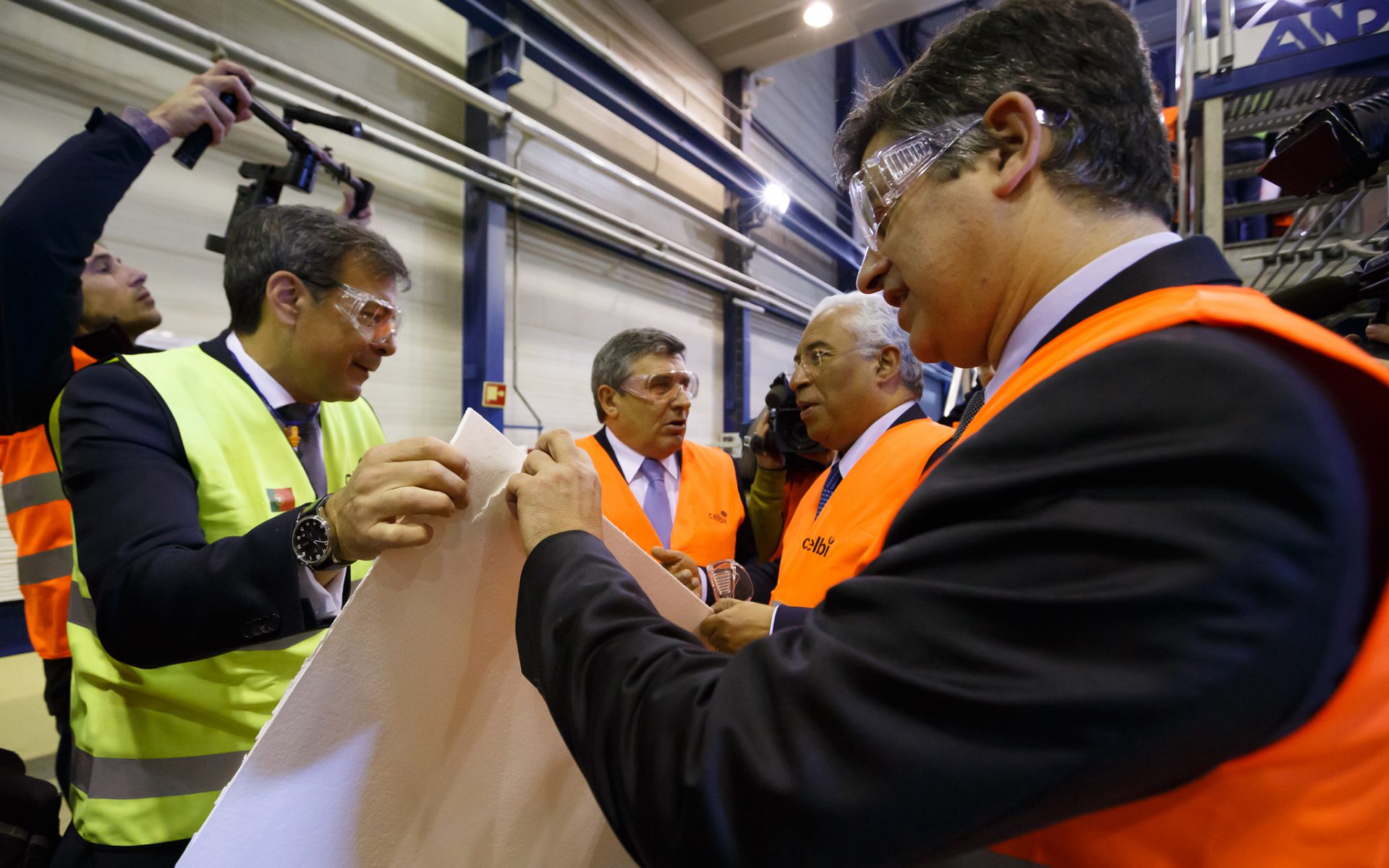 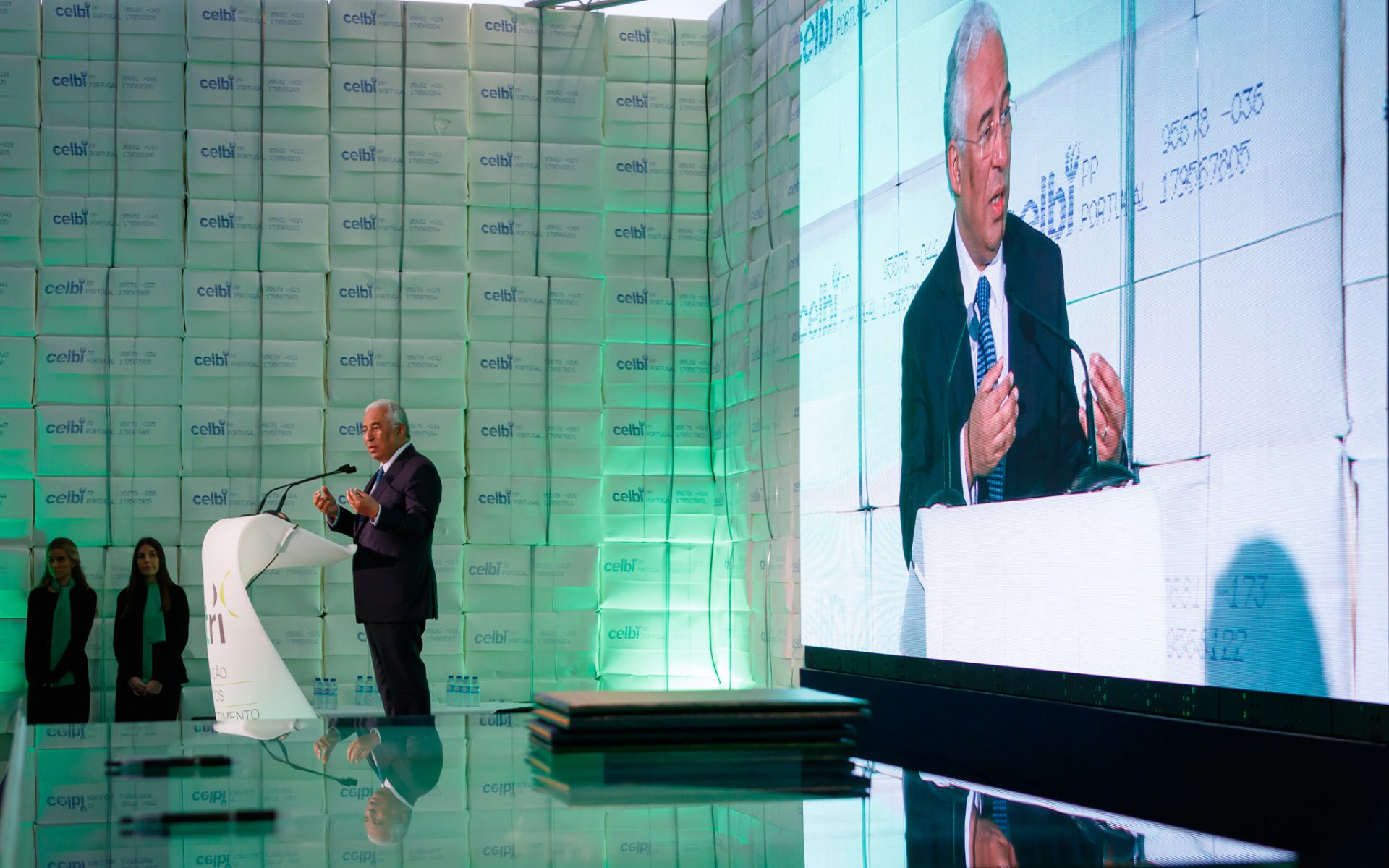 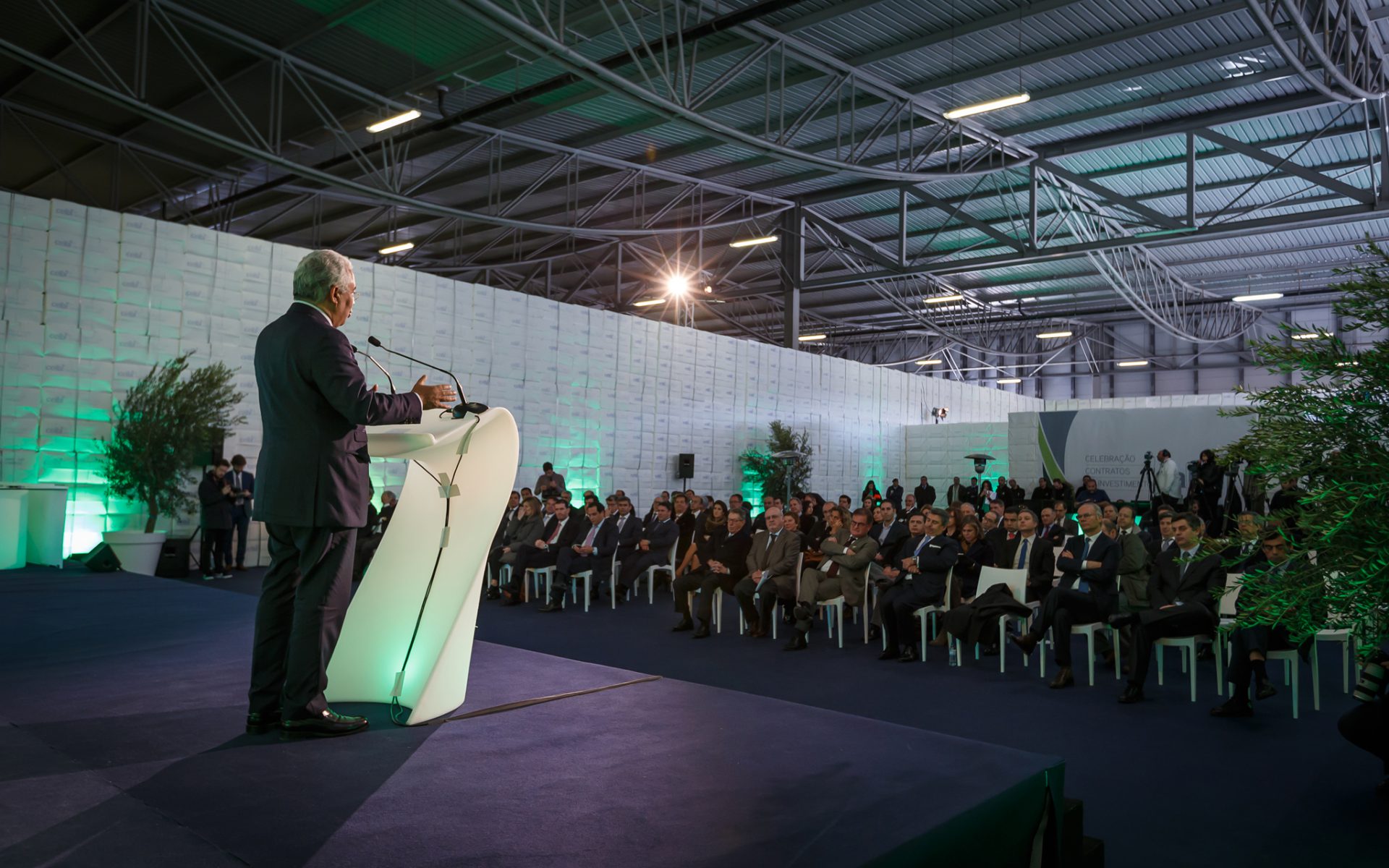 The 40 million euro investment in Europe’s se-cond largest paper pulp production unit will endow Celbi with new equipment for the timber debarking and chipping stages and for pulp cleaning and bleaching. The new technologies adopted mean that Celbi is the largest facility in the world for eucalyptus round timber debarking and contribute towards major operating improvements.

With this investment, Celbi has become the only company in Europe to possess this high-capacity and highly complex industrial process, and has joined a small group of companies worldwide to own these technologies and perform the process on this scale.

Altri exports 93% of pulp for paper

Altri is an exemplary eucalyptus pulp producer in Europe, with an installed production capacity of over one million tonnes per year, from its three units located at Figueira da Foz, Vila Velha de Ródão and Constância. Altri’s total revenue was 612.5 million Euros in 2016, and it exported 959.2 thousand tonnes, representing a year-on-year rise of 2.2% and accounting for 93% of its total sales. Europe and China were its main export markets.

Altri’s recent investments will strengthen Portugal’s competitive edge as a producer of pulp for paper, in third spot after Sweden and Finland.

As well as producing eucalyptus pulp, Altri manages 82 thousand hectares of forest in Portugal and also has a hand in the forest-based renewable energy sector, specifically industrial cogeneration via black liquor and biomass. The forestry strategy is centred around making full use of all the components derived from the forest: pulp, black liquor and forest waste.