The company showcases the practical effects of its recent investments to reduce the impact its business activity has on the River Tagus. Indeed, sometimes the effluent parameters are better than those of the river water itself.

Over the least three years Celtejo has invested over 130 million euros to improve its environmental performance. These investments include a new recovery boiler, a new Industrial Waste Water Treatment Plant (IWWTP), remodelling of the pulp line and a new steam turbine.

These state-of-the-art facilities have been vital in preparing the factory for future challenges, in line with the strategy to fight pollution at its origin rather than investing in end-of-line treatments. Current effluent quality allows for around 20% of the treated effluent to be reused. A mixture of water and effluent is used in the cleanest area of the industrial process during cleaning of the end product.

Considering the moment of stabilization and consolidation of the projects implemented in the recent past, Celtejo understood that the moment had arrived to open its doors. Thus, the Celtejo de Portas Abertas event was organized, which recorded the presence of several Altri officials, regional mayors, environmental associations and various media.

The main reason for this initiative was simply to answer questions and dispel the myths about the actual impact of Vila Velha de Ródão on the Tagus. The city council is only given media airtime when there is pollution in the river, and the finger usually gets pointed at the production sector located in the district. 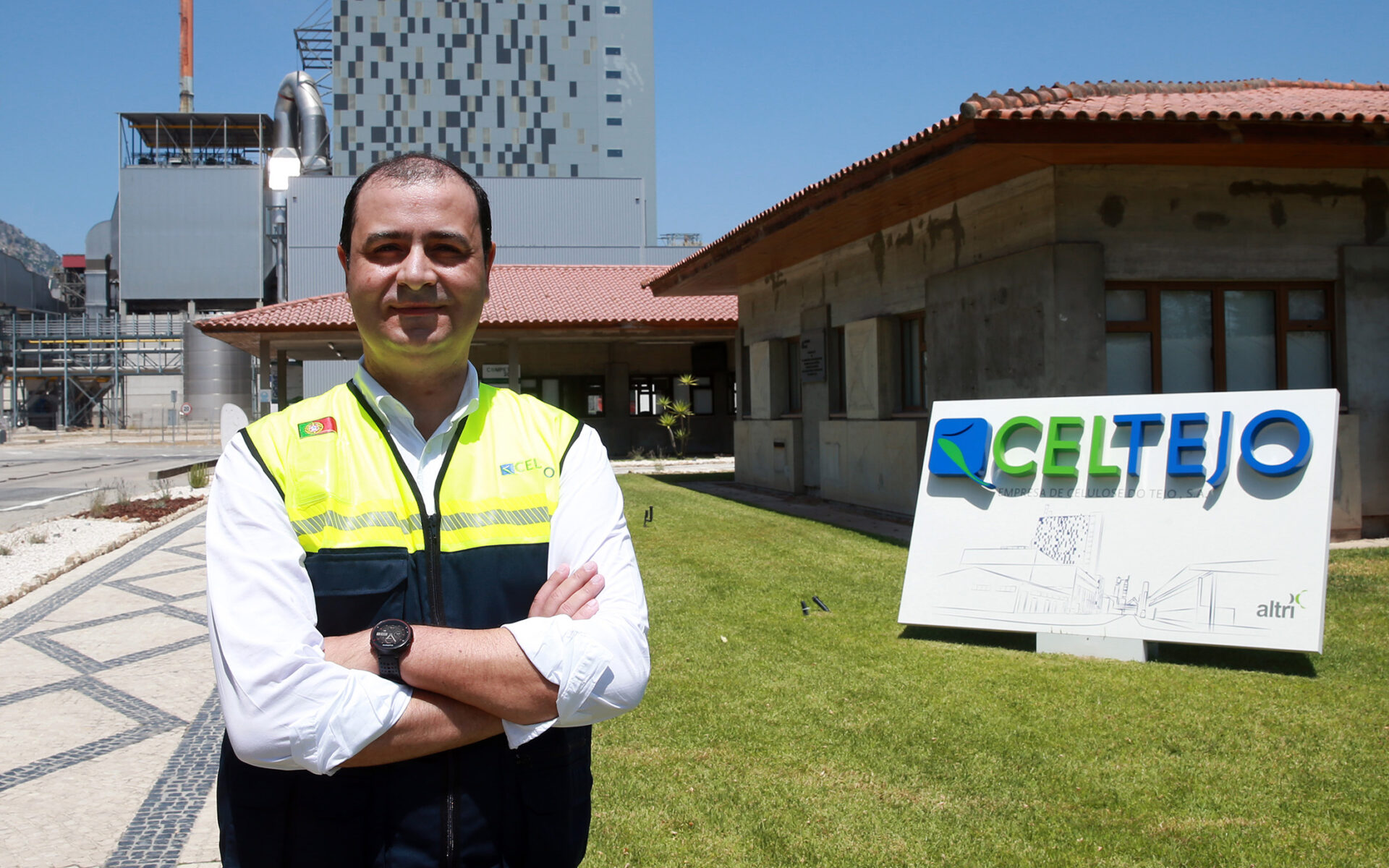 This is why Pedro Baptista, the Industrial Manager of Celtejo, launched the event to highlight the investments made since 2017 and to show those who took part that there was no basis for linking the foam and colour – which occur cyclically – with the industrial activity which takes place at Celtejo.

According to Pedro Baptista “We are very sure of the path we have been treading in recent years.” He adds that the quality of the effluent produced by Celtejo has reached such high levels that it can be used to substitute a portion of the water collected from the Tagus. “We are now able to substitute 20% of that water with factory effluent.”  Strange, but true. The new investments have enabled Celtejo to recover a considerable amount of effluent water and use it again in producing bleached pulp, whose quality requirements are very demanding. As he explains, “It wouldn’t make any sense whatsoever to use the effluent like this if its quality weren’t up to scratch”. This measure allows Celtejo to withdraw less water from the river and release less effluent into it.

Pedro Baptista emphasises that the quality of the effluent and of the water from the river Tagus are closely and strictly monitored. “We have probes which continuously measure a series of parameters relating to the effluent and river water which we pass onto the Agência Portuguesa do Ambiente (APA) {Portuguese Environment Agency}. In addition, we have a schedule of tests (the compulsory tests and some extras ones) which complements the probe readings.”

All the information gathered by the probes is continuously transmitted round the clock, each and every day, without any interference by Celtejo. The probes are regularly submitted to metrological checking operations and are complemented by a vast battery of tests.

The licence in force demands that Celtejo performs 4,020 tests per year, but in actual fact the company performs 24,000 tests covering both effluent and river. It should be highlighted that only 15% of these tests are compulsory. From 2018 to 2020 the factory’s capacity evolved gradually, rising from a monthly production of 18,000 tons to 22,000 tons.

This increase was only possible because of two factors. Firstly, the cooking conditions (in the digestor) changed, and they are now less aggressive than before. Pedro Baptista tells us that “This allowed us to produce more pulp using the same amount of timber and also to generate less black liquor.” By burning off this black liquor Celtejo is able to fulfil its energy needs (steam and electricity). Furthermore, the products resulting from this burn-off enables Celtejo to close the chemical recovery cycle.

The new investments had a great impact on the environmental aspect of the business activity, but also on the unit’s efficiency levels. Even those areas which have not yet undergone major overhauls have seen their performance improve, such as the drying machinery which raised its capacity by around 15%.

Secondly, there was the new recovery boiler, which lent more stability to the process and the remodelling of the raw pulp cooking, screening and bleaching operation, which allowed Celtejo to put into practice what it had always argued: that effluent quality is determined at its origin and not by the performance of the IWWTP.

According to the industrial manager, “Although our plant performs exceptionally well, the most recent contributions towards improving the quality of our effluent came from the area of the pulp line.”

Despite increased production, it can be seen that there was a remarkable improvement to the quality of the effluent treated by Celtejo’s IWWTP. All the indicators are very healthy, but Pedro Baptista highlights two of them: chemical oxygen demand (COD) and colour.

“The low COD comes from the improvements to the fibre line. Cleaning the pulp well leads to a reduced organic load and benefits consumption of bleaching chemicals.” Pedro Baptista explains that the company takes great pains to reduce colour, which is the parameter that is most obvious to the layman, although he points out that “associating colour with effluent quality is not always the most appropriate way of gauging things. Right now we can say that our effluent is almost the same colour as the river water.”

Although not a parameter of control, Celtejo also monitors the oxygen dissolved in the Tagus water. During the driest part of the year, they sometimes add oxygen to their end effluent. It has been noted in recent years that dissolved oxygen levels in the Tagus are higher downstream from the factory than they are upstream.

Mr Baptista continues, “Celtejo hasn’t just sat back and put its feet up after these results. We are analysing other measures which will enable us to apply the concepts of the circular economy.”

One possible scenario is to use the effluent as irrigation water, but in order for this to happen there is a whole licencing process to go through first before the appropriate authorities will grant permission. There are also some activities underway in the area of the biological sludge generated at the IWWTP.

He states “Tests are being done on a pilot facility for a specialist company, whose aim is to create a fertilizing product which can be used in agriculture and forestry.” The aim is in fact to give back to the forest what has been taken from it.

The licence in force demands that Celtejo performs 4,020 tests per year, but in actual fact the company performs 24,000 tests covering both effluent and river

Independent study of the quality of water in the Tagus

Celtejo commissioned an independent study to characterise the quality of the water from the Tagus at various different points of the river, to be undertaken by a laboratory associated with the University of Coimbra.

“We want to study the circumstances which led to the occurrence of foam and colour, especially in the region of Abrantes. When the study began, the borders were closed owing to the pandemic and we weren’t able to set foot in Spain, but now that they have opened up again samples have been taken from the Tagus-Segura Water Transfer.”

The environmental associations which took part in the initiative acknowledged the importance of the investments made and their impact on Celtejo’s environmental performance. Luís Pereira, the mayor of Vila Velha de Ródão, enjoyed the event, and expressed the local autho rity’s satisfaction with Celtejo’s performance. He learnt all about the project to reuse treated effluent for irrigation.

The association accepted the request made by the mayor of Vila Velha de Ródão, and showed an interest in cooperating with Celtejo to guarantee improvements to the quality of the Tagus water and in accessing the study being undertaken by the independent laboratory.

The results of this study are expected this coming November. In turn, Celtejo was absolutely transparent and cooperative. Pedro Baptista assured everyone that “We all have a stake in having a relationship of full cooperation with those bodies which, one way or another, are affected by our operation.”

Tour of the facility

Once the presentation and question-and-answer session were over, there was still time to take a tour of the factory and the IWWTP. The last leg of the tour included observing the end effluent passing through a transparent pipe, which went down very well with the visitors. 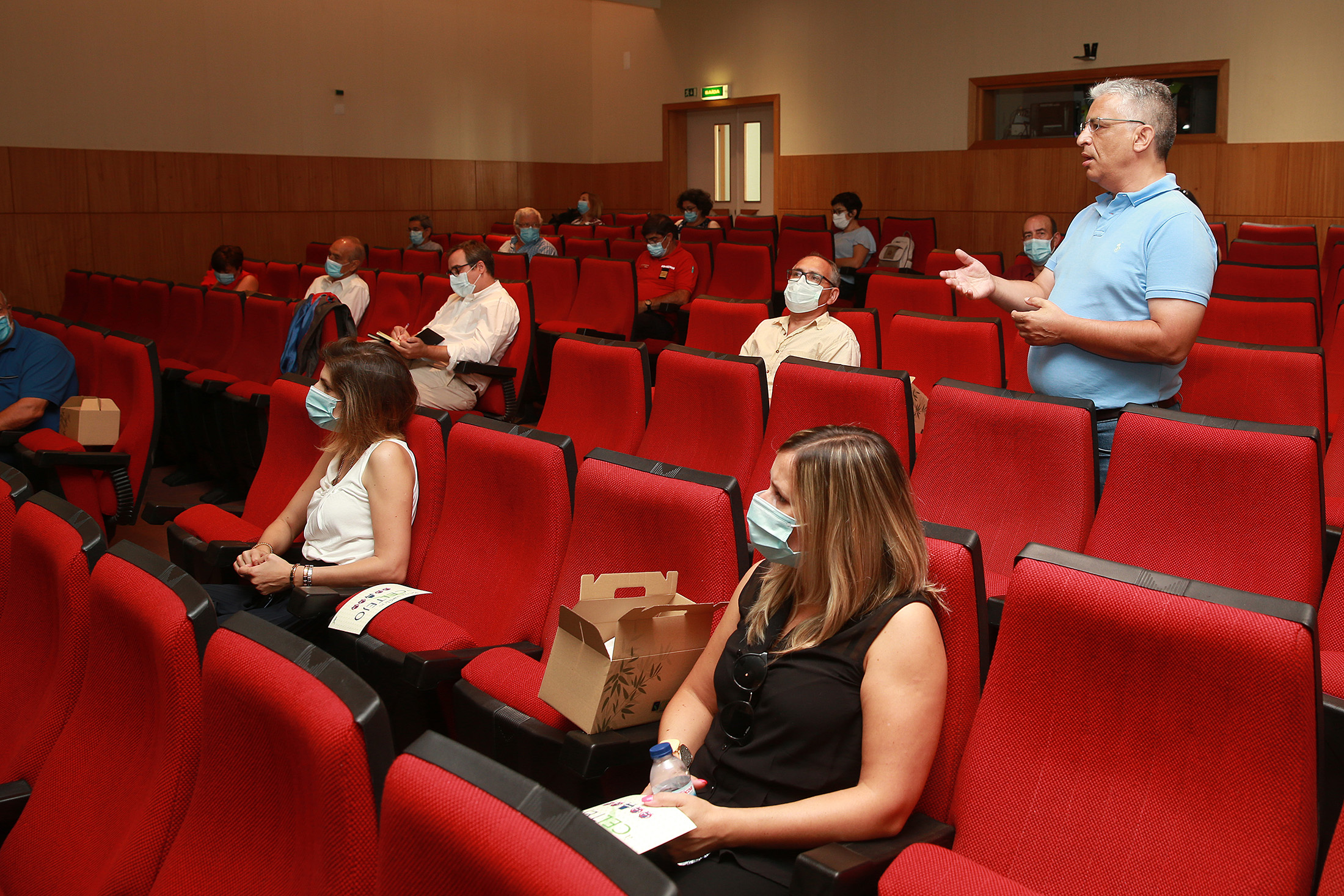 By the end of the event, everyone who took part had learnt all about the many measures and actions implemented by Celtejo, concluding that the effluent quality can even exceed the quality of the Tagus river water.

When asked for his view of how the initiative had been, Pedro Baptista said that it was “a success which marks a new stage in the relationship between Celtejo and the community and with those organisations whose aim is to protect the Tagus”.