Gender Equality as a driver of sustainable development

Women make up around 50% of the world population as workers, managers, consumers and citizens and, if given the opportunity to fulfil their role to the fullest, they will make their contribution to society and towards advancing sustainable development.

Gender equality is a multipronged issue which can be addressed from multiple perspectives: the moral and human rights-based perspective associated with diversity and inclusion, where everyone has the same opportunities and rights to access or participate in society and the economy, and where – in theory – there is no disagreement. The politically correct perspective, embodied in a universal commitment to equality between men and women, is not implemented in organisational practice because it is not backed up by action plans. And most recently, the financial perspective, where gender equality, and particularly gender diversity in senior management, incorporates a range of indicators highlighted by financial analysts and ratings systems, which influences how companies are assessed on sustainability.

This has been the driver which is catapulting the subject of academic studies and public policies to make gender equality a cross-cutting theme in companies’ agendas, due to its influence on their ESG (Environmental, Social and Governance) performance. Interestingly, and from a more pragmatic viewpoint, the financial perspective could do more for gender equality than years of social activism. Focusing on the cause, and regardless of the reasons, this route places the issue firmly in the top priorities and plans of action of thousands of business organisations around the world.

Putting perspectives aside, the core issue is that women make up around 50% of the world population as workers, managers, consumers and citizens and, if given the opportunity to fulfil their role to the fullest, they will make their contribution to society and towards advancing sustainable development. A diverse workforce offers more skills, experience and innovation. Diverse teams analyse problems from different perspectives, thereby increasing the probability of coming up with more universal solutions. 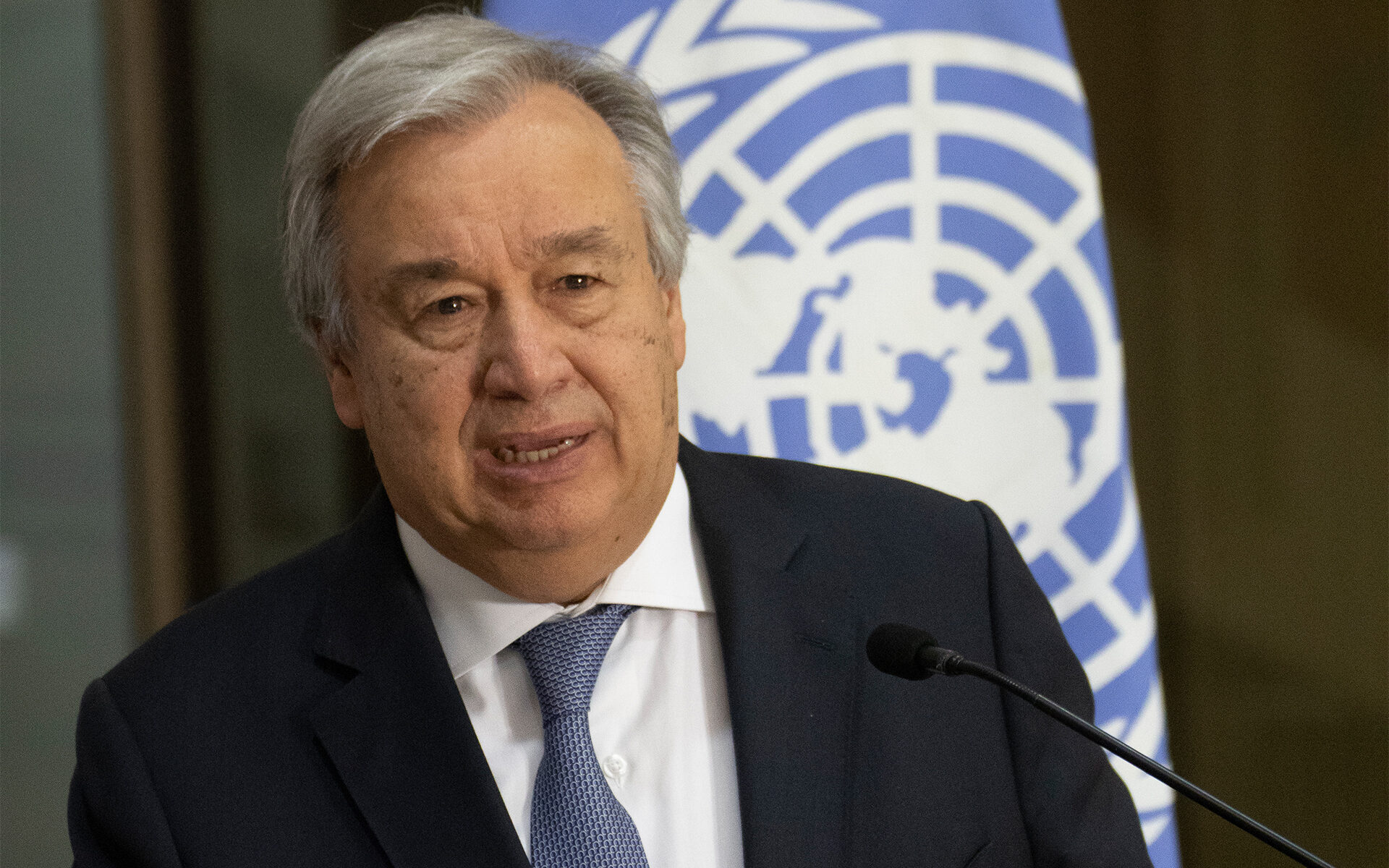 The UN Secretary-General and Chair of the Board of UN Global Compact, António Guterres, characterised inequality as the “overwhelming injustice of our time and the greatest human rights challenge we are currently facing”.

Since the issue carries so much weight in companies’ performance, various studies are now substantiating the merits of positive discrimination. Recent research by Morgan Stanley shows that companies with a higher percentage of females have annual returns which are 2.8% higher than less diverse companies, and empowering women may, according to the McKinsey Global Institute, mean a 28 billion dollar increase to the world GDP as soon as 2025. However, in order for the markets to benefit from such growth levels, the gender gaps so well characterized by the World Economic Forum (WEF) must be closed.

According to the WEF’s Global Gender Gap Report in 2021, which analyses the gap across four key dimensions, the two entitled “Economic Participation and Opportunity” and “Political Empowerment” are where the gap is wider. It will take 267.6 years and 145.5 years, respectively, to achieve parity in these dimensions. In terms of “Educational Attainment” and “Health and Survival”, there is virtually no difference at all between men and women, with just 14 years needed to close the gap and achieve an equal footing. 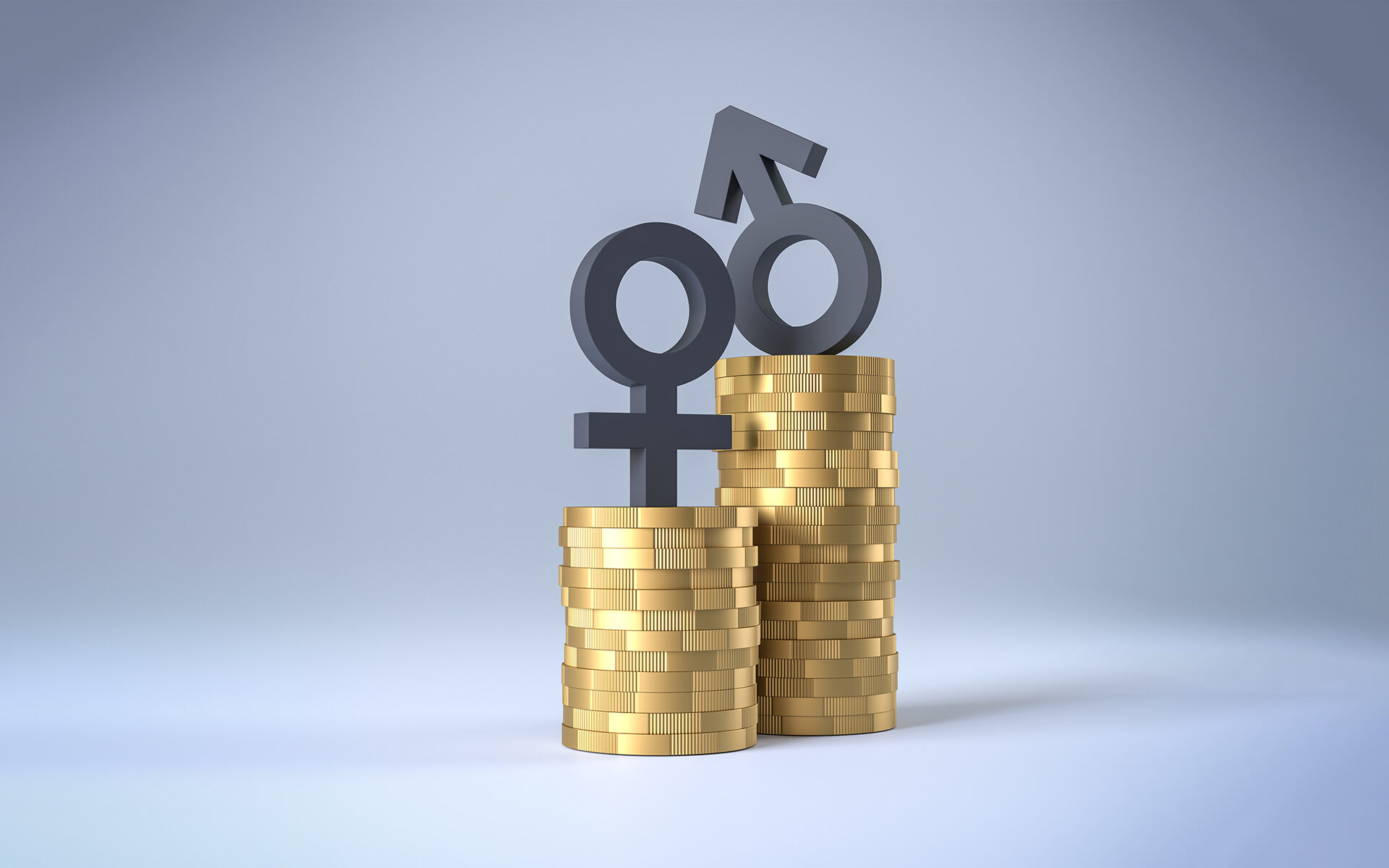 The reality is that meritocracy has resulted in a 268-year economic gap between men and women and that is unacceptable.

to close the gap and achieve an equal footing.

And so, when espousing meritocracy as a policy, it’s like saying we’re going to maintain the status quo. We need further public policies to close the gap, such as those which set quotas for women in decision-making roles, and robust corporate policies based on positive discrimination of the under-represented gender. Decisive action. No hesitation. Robust policies lay the foundation for environments which support the integration and retention of women, but without specific targets, adequate plans and performance reports, the chances of closing the gap or influencing the dominant corporate culture are lowered.

Together with UN Women, the UN Global Compact created the Women Empowerment Principles – WEP initiative, which proposes seven principles to be incorporated by companies to promote a more inclusive culture. Of the 3,500 companies which used the Wep Gap Analysis Tool to assess their performance on gender equality, only 3% achieved the highest score – Leader – of over 75 points, and 16% attained the level below that – Achiever – with a score of 50 to 75 points. The common denominator is the commitment to gender equality and defending the issue publicly. However, a lack of performance reports or goals, targets and strategies to fulfil the commitments made, garners very low scores. It’s easy to make the commitment but difficult to follow through.

The European Union is leading the world in gender equality. Indeed, 14 of the world’s 20 highest-scoring countries are EU member states. We can confirm that government gender diversity policies influence companies’ performance on gender equality.

Quotas are naturally controversial, as they are as perceived negatively, but we invite our readers who don’t believe in quotas who argue that they don’t align morally with the issue, to reconsider their position. European countries have made significant progress since 2011 after introducing targets into their legislation, as well as voluntary initiatives and quotas to have women on their Boards of Directors, thereby narrowing the gender gap by around 50% in comparison with countries which did not implement such measures.

In 2021, Portugal came in at 15th place in the EU Gender Equality Index with 62.2 points out of 100. This was 5.8 percentage points lower than the EU’s score as a whole, but was up four places – or 8.5 points – since 2010. Portugal’s progress has been faster than that of other EU member states. This was partly down to Law no. 1/2019 which enshrines the minimum representation of 40 % of each sex for candidate lists submitted to the Portuguese Parliament, to the European Parliament and to local government bodies, as well as for candidate lists for parish council members, and Law no. 62/2017 which stipulates that the proportion of people of each sex appointed to each governing and supervisory board of each company must not be less than 33.3 %. This system is applied to governing and supervisory boards of public sector bodies and of companies listed on the stock exchange. But although these improvements are encouraging, there is still a lot of ground to cover and challenges to be overcome. Inequality persists, wage inequality is a reality in many sectors, and women are still over-represented in lower-skilled and therefore lower-paid positions, and under-represented in decision-making positions. Wide-ranging and lasting policies and solutions need to be implemented at multiple levels. 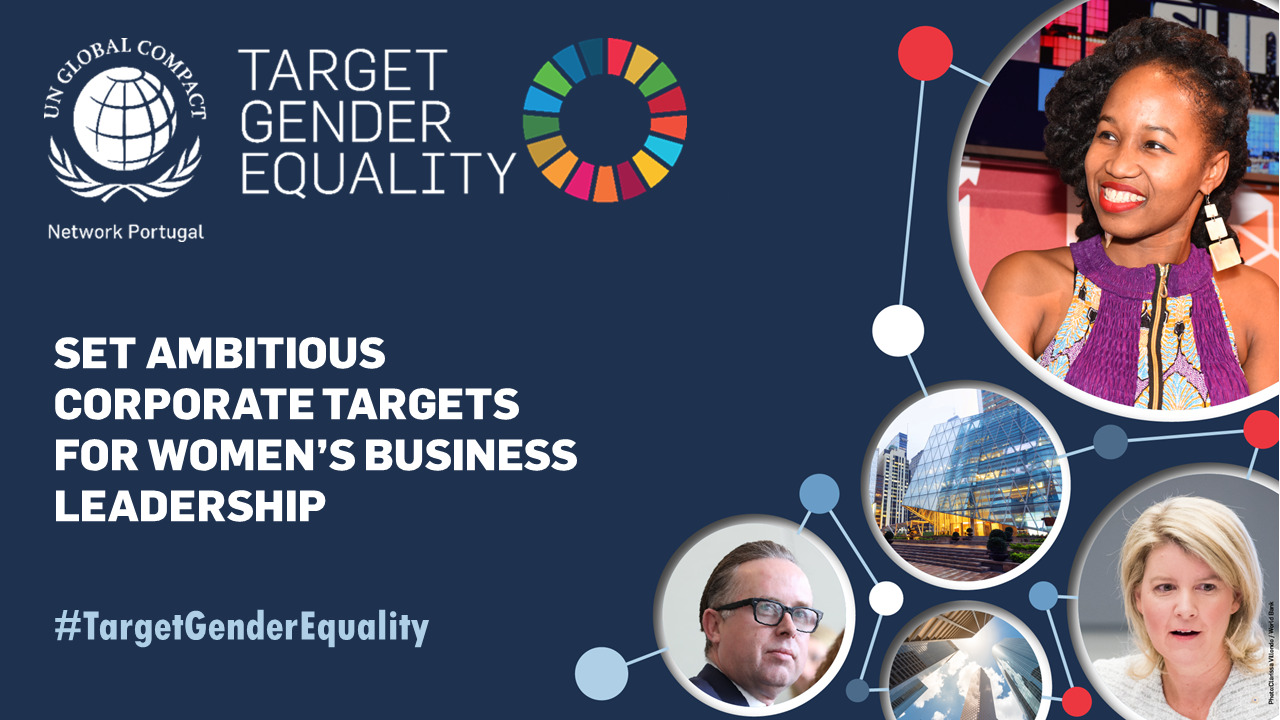 In terms of the United Nations, its 2030 Agenda and Sustainable Development Goals highlight gender equality via SDG 5 and its mainstreaming across other goals, thereby demonstrating the gap which affects humanity as a whole.

At a more corporate level, and given that the UNITED NATIONS GLOBAL COMPACT [UNGC] is an initiative which asks companies to bring their strategies and operations in line with Ten Principles in the fields of Human Rights, Labour, Environment and Anti-corruption and to contribute towards attaining the Sustainable Development Goals, the UN’s mission includes urging companies to set ambitious targets and provide teaching resources so that they may be reached. This special initiative by the Secretary-General of the United Nations thus listed three major priorities for action to be developed with companies during the period of 2019-2023: gender equality, climate action and focusing on the 8 SDG most impacted by companies. In order to undertake this mission, the UNGC’s local networks, such as the Global Compact Network Portugal, implemented specific programmes to support companies in their integration of the gender perspective in their business policies. An example of this is the Target Gender Equality Programme, whose second edition included ALTRI.

The first edition of the programme was rolled out in 30 countries and the second has already netted 45 countries with companies willing to make this commitment, based on an action plan.

The aim of Target Gender Equality is to encourage and support companies in setting and achieving ambitious targets for women’s representation and leadership in companies.

By analysing performance and holding training workshops and multi-stakeholder and advocacy dialogue sessions, companies reinforce their implementation of the Women’s Empowerment Principles and strengthen their contribution towards SDG 5 | Target 5 of the UN’s 2030 Agenda, which calls for the full and effective participation of women, and for equal opportunities for leadership at every level of decision-making, particularly in economic life, by 2030.

Altri embarked on the programme with the guided deployment of the WEPs Gender Gap Analysis Tool to help the company to understand its current gender equality performance, and identify gaps and challenges. It completed three interactive workshops together with other companies to aid peer learning, and developed an Action Plan to be implemented in the medium-term. Commitment has become action, and we are setting an example.

As a result of the second edition of the Target Gender Equality Programme, in November 2021 the Global Compact Network Portugal (GCNP) partnered with the Secretary of State for Citizenship and Eqality, Dr. Rosa Monteiro, with the Commission for Citizenship and Equality, represented by its Chair, Dr. Sandra Ribeiro, and with the Commission for Equality in Labour and Employment, represented by its Chair, Dr. Carla Tavares, to propose a National Target for Gender Equality, aimed at assuring the full and effective participation of women and equal opportunities for leadership at every level of decision-making in political, economic and public life. We believe that by marrying the merits of public policies with bold private initiatives we can attain the necessary transformation, and so we are proposing a more ambitious quota:

– The NATIONAL TARGET FOR GENDER EQUALITY challenges Portuguese companies to reach 40% of Women in Decision-Making Roles by 2030 [Board of Directors, Executive Committee and Senior Managements].

It is anchored in European and Portuguese legislation and in targets 5 and 9 of SDG 5 – Gender Equality:
– Target 5: Ensure women’s full and effective participation and equal opportunities for leadership at all levels of decision-making in political, economic and public life;
– Target 9: Adopt and strengthen sound policies and enforceable legislation for the promotion of gender equality and empowerment of all women and girls at all levels.

The national target of 40% of women in decision-making roles will mean significant strides forward, but will require robust decisions, internal positive discrimination policies and wide-ranging awareness campaigns to explain its merits. Companies which sign up to the initiative will be fertile ground for case studies and good practices as there will be multiple challenges to be overcome. The GCNP aims to support companies in areas of weaker knowledge such as market-orientated policies, which include the application of gender criteria to company procurement. 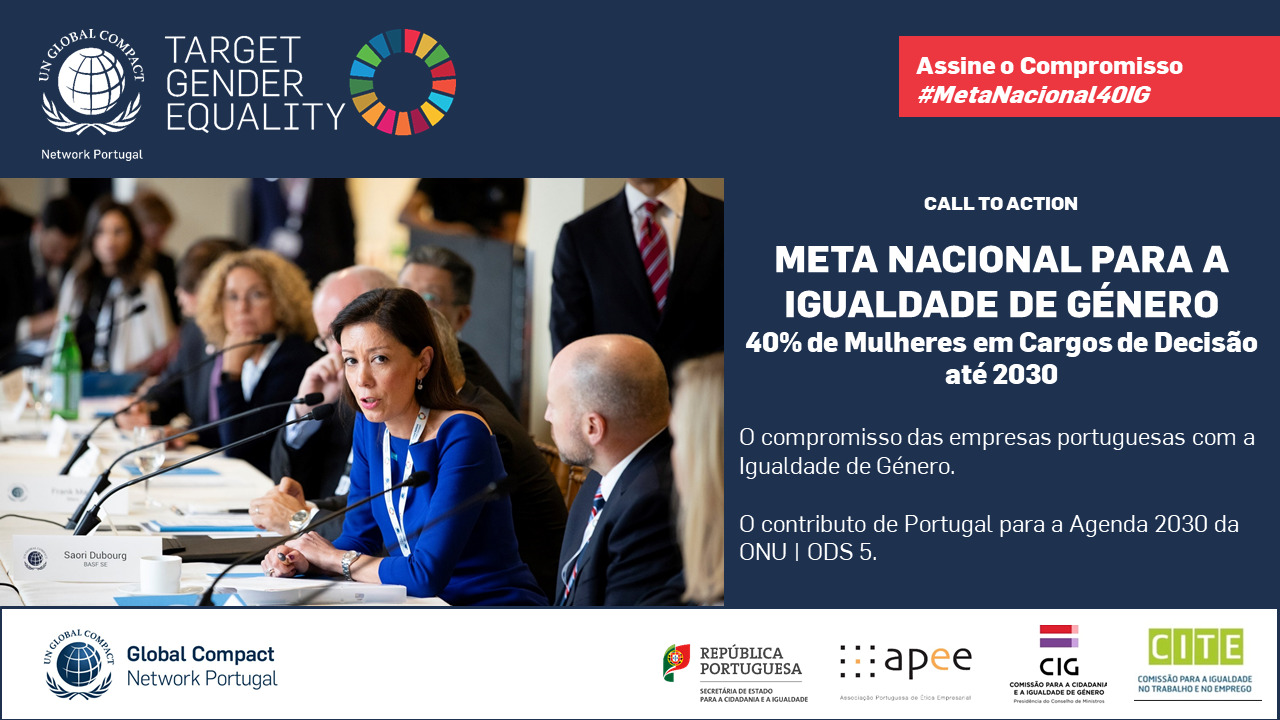 The NATIONAL TARGET FOR GENDER EQUALITY challenges Portuguese companies to reach 40% of Women in Decision-Making Roles by 2030.

Internally, the effective implementation of gender equality policies entails action at recruitment level, involving training up technical and senior personnel, internal mobility taking into account the under-represented sex, career development procedures, gender-diverse multidisciplinary teams, in terms of transversal projects and panels, and training women and developing their skills with a view to creating a pipeline to higher management positions with greater responsibilities. These policies need to be helped along by incorporating gender diversity goals into the departmental goals which subsequently impact assessment and reward systems for middle and higher managerial personnel. Unless these instruments are deployed, the commitments are not able to be fulfilled. It is a medium and long-term mission.

Externally, the measures implemented will be centred around the areas of communication and marketing, community support and procurement. Adopting and designing communication and marketing instruments which use more inclusive images and language, so as not to reinforce gender stereotypes. As regards the community, prioritising or conditioning support or sponsorship of community initiatives and projects involving both sexes, whether in the area of sport, education, social action or welfare. And finally – and probably in the area of greatest impact – including gender criteria in procurement: providing teams with gender equality training, ensuring mixed-gender teams, female project coordinators and gender diversity in management. More news to follow soon.